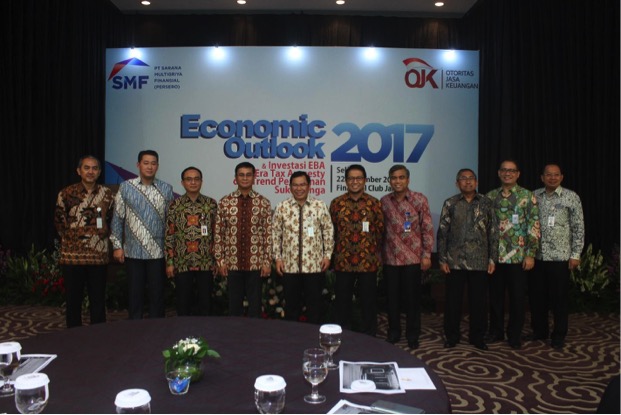 The annual activity of SMF is filled with the exposure of Economic Outlook, this time in the form of panel discussion, presented by practitioners such as Chief Economist of BTN, Winang Budoyo, Director of OJK Investment Management, Sujanto, Deputy Supervisory Questionnaire IKNB II OJK, Dumoly F. Pardede, and Director of Mandiri Healthcare, Gatut Subadio. Apply as moderator of SMF Director, Heliantopo.

SMF President Director Ananta Wiyogo said that the 2017 Economic Outlook activity aims to obtain information on macroeconomic conditions in 2017, exposing the potential investment in Asset Backed Securities (EBA) instruments in the era of tax amnesty, describing EBA-SP as an alternative to housing finance, And get feedback from stakeholders for further action with a more concrete action program.

“We hope this activity will increase investor’s knowledge about the plan / outlook in 2017 and the activities of secondary housing financing especially in Indonesia and the achievement of PT SMF during 2016,” said Ananta Wiyogo. SMF as a State Owned Enterprise (SOE), under the Ministry of Finance, assumes the task of the Government as a special mission vehicle to build and develop Secondary Housing Market through securitization and financing. Through these activities since its inception, SMF has been channeling medium / long term funds from the capital market to the primary housing finance sector until October 2016 cumulatively reached Rp26.45 trillion. Meanwhile, for funding of SMF Financing Program has issued bonds amounting to Rp15,042 trillion. In addition to securitization and issuance of bonds SMF also made lending to date amounting to Rp19, 29 trillion with 0% NPL.

“Since 2009, up to now we have conducted 10 securitization transactions where the securitization is 9 times done in collaboration with Bank BTN and 1 time with Bank Mandiri. All EBA mortgages that we issue get idAAA rating from Pefindo, please note that the rating reflects the ability and willingness to pay the obligations on time very strong, “said Ananta Wiyogo. Ananta said that the success of SMF is inseparable from the support of Mr and Mrs Investors, the Supporting Institutions and Capital Market Profession, SRO and OJK Regulator. On that occasion he invites investors to increasingly confidence to invest in securities issued by PT SMF, both in the form of EBA SP and bonds (bonds & MTN), considering that PT SMF is a state owned 100% by the government, which is engaged in financing Secondary housing.