Increased Fund Flow in 2016, SMF Will Expand Segmentation Loan Distribution in the Year 2017 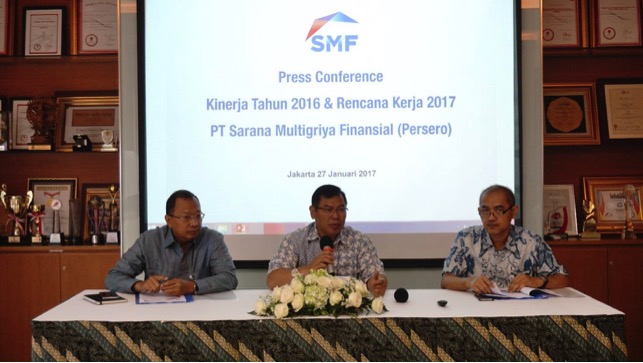 Jakarta, 27 Januari 2017 – PT Sarana Multigriya Finansial (Persero) or SMF, again recorded a performance increase during 2016, especially in carrying out its mission to channel funds from the capital market to mortgage distributors in the housing finance sector, through securitization and lending transactions reaching Rp 7.14 trillion. The cumulative total accumulated funds that have been streamed SMF from 2005 to December 2016, reaching Rp27, 39 trillion increased 35.26% from the previous year of Rp20, 25 trillion.

In addition to performance improvement in 2016, SMF also successfully launched         and socialized SOP KPR BPD SMF which aims to encourage the creation of affordable, suitable, and applicable KPR BPD product standards, and increase the capacity of KPR BPD distribution. The SOP also aims to support the fulfillment of the needs of the entire Indonesian community for decent and affordable home ownership for every Indonesian family.

“The SMF’s Key Performance Indicators (IKU) is measured by the amount of funds disbursed from the capital market to the housing finance sector,” said Ananta Wiyogo, President Director of SMF, in “Performance Press Conference 2016 and 2017 SMF Plan” held at Graha SMF, Jakarta.

Since 2009, until 2016 SMF has facilitated 10 securitization transactions in which 9 times were conducted in collaboration with Bank BTN and once with Bank Mandiri. SMF has also worked with 17 Regional Development Banks in all regions of Indonesia, of which 5 are still in the MoU phase. SMF has also signed a cooperation agreement with 6 Sharia Commercial Banks (BUS) / Sharia Business Unit (UUS), and 4 Financing Companies, of which one financing company is still in the MoU phase.

Growth in loan disbursements is also accompanied by the issuance of corporate bonds as a source of funding. During 2016, SMF has issued bonds amounting to Rp2.751 trillion through the issuance of the fourth phase PUB III bonds, amounting to Rp630 billion, PUB III phase V, Rp945 billion and PUB III phase VI, Rp1,176 billion. Until the end of 2016, SMF’s outstanding (outstanding) debt position reached Rp6, 53 trillion, the figure is based on un audited financial statements for the period December 31, 2016.

Related to the work plan in 2017, Ananta said that SMF will focus on expanding the target of loan disbursement, namely to BPD throughout Indonesia, and finance companies. Ananta hopes that with the increasing number of capital market funds used for the distribution of KPR and the implementation of standardized KPR, it is expected to form a mortgage portfolio that is ready for securitization. As planned in the previous year, in the year 2017, SMF will also begin to implement the SMF mortgage development pilot project with several multi finance companies. Related to this, Ananta explained that KPR SMF is a product aimed at improving public access to housing loans channeled through multi finance in cooperation with SMF. KPR SMF offers mortgage products that have fixed interest rates for a certain period so that the value of debtors installment obligations more stable. “KPR SMF is a form of implementation of the implementation of SMF mission as a State Owned Enterprise (SOE) under the Ministry of Finance, which assumes the task of the Government as a special mission vehicle to build and develop Secondary Housing Financing Market,” Ananta said. It is expected that the presence of SMF KPR can meet the needs of the primary housing finance market will be mortgage products that can provide certainty installments for the debtor. In addition, it can increase the types of mortgage suppliers to improve the efficiency of the primary multi finance market to the community, and to prepare a multi finance mortgage portfolio which in the future can be securitized. “We hope SMF will be able to play a more important role in creating quality mortgage products and able to meet the needs of all segments of society,” said Ananta.